Businesswoman Clancy flees London to return to Nelson’s Bar. After her cousin Alice left her fiance at the altar years before, she’s not particularly welcomed back. But with no job and nowhere else to go, she becomes the caretaker of a row of idyllic cottages in coastal Norfolk where she meets Aaron and immediately becomes part of this community. Who could have thought that so much could happen in one little town!
With all of the bad news in the world, this story simply makes you feel good. The issues are topical - being cheated on in the most atrocious of ways, the search for love and belonging, the intricate dynamics of family and suffering terrible tragedy are all issues we can relate to and novels like this one remind us we can triumph.
Sue Moorcroft is the master of creating fantastic, scenic and adorable communities that she fills with entertaining characters who all play a pivotal role. She drafts characters we learn to love and gives them quite a hard time along the way. It was simply a delight to read. (LF)

In the small village of Middlelip, Gabe, Alexia and Jodie are working hard to open the community cafe before Christmas. The whole village has pitched in but then they discover that all the money has been stolen by Jodie’s boyfriend, who is now missing.
For Alexia, who is an interior designer, this was her chance to prove her skills to a London investor. With the help of Ben, Gabe’s nephew who is trying to get over his divorce, she will try to open the promised cafe before Christmas.
This is an enjoyable and heart-warming novel about never giving up and realising your dreams. Even when everything goes wrong, Alexia doesn’t give up and in the end she gets everything she hoped for. I loved the small village atmosphere and the closeness and support of the people. Romantic, with likable characters, and a cast of adorable animals, this is a good novel to enjoy in the lead-up to Christmas. (NP)

Ava Blisham hates Christmas. As a child her parents avoided Christmas and the day her grandmother died, her festive spirit did, too.
As Christmas approaches this year, Ava is broke, struggling to make ends meet in her millinery business and with an ex-boyfriend who won’t accept their relationship is over, all looks bleak.
Until she meets Sam Jermyn. He’s a communications/PR extraordinaire and their chance encounter changes the projection of Ava’s life. His connections assist her cash flow and his media genius assists her to keep her ex away. Despite Sam’s success though, he has his own tragic past and a mother suffering from cancer.
Together with the blizzard-cold conditions of London and the food, parties, carols and shopping, it’s a delightfully festive read. Sue Moorcroft has an amazing ability to create flawed characters who we cannot help but fall in love with. (LF)

After committing a serious gaff with her ex-boyfriend that has dramatic consequences, Liza Reece swears to lead a celibate and alcohol-free life. Even irresistible Dominic who comes to her for treatment of his narcolepsy cannot distract her.
Dominic has his own issues dealing with his recently diagnosed sleep condition that has caused him to lose his job and his girlfriend.
The two are drawn together in battle over the lease to the treatment centre where Liza works as a reflexologist. Dominic needs a new interest and a business to run in light of his recent unemployment. He wants to turn the centre into an adventure wonderland. Liza wants to expand the centre to cater for all people's treatment and beauty needs.
When the goal posts unexpectedly change, they are forced to team up and fight for the centre together. Can they work together and resist the physical attraction they both feel towards each other? Can they both let go of their pasts to make a future together?
This is a great book with likeable characters and interesting plot that delves into the sleep condition narcolepsy and the world of reflexology. (LF)

Honor's life in America has fallen apart. Taking her redundancy money, she heads over the pond to England to find the mother who abandoned her as a baby.
She soon meets the Mayfair family, and she seems drawn to the mysterious Martyn. His seemingly carefree playboy lifestyle keeps Honor at bay, and she is only starting to get close to him when her past gets in the way.
The identity of her mother is revealed with agonising results and Honor has a big decision to make - will she go back to her old life in America?
Written from both Honor and Martyn's perspective, this gives you a great insight into the characters, with a good supporting cast of the Mayfair sisters and the workers of The Teapot. The secrets of the characters are drip fed through the book, to keep you turning the pages, and there are few twists to catch you out when you think you've guessed the plot. Set in a seaside suburb of Brighton, this makes a great summer beach read. (AB)

The writing is literally on the wall for Cleo and Gav's marriage. With their latest argument fresh in her mind, Cleo heads out for a girls' night out and ends up having a one-night stand with Justin. But then Gav admits he acted a bit hasty in declaring their marriage over.
Little does Cleo know she is going to have to face up to the repercussions of her fling. Which way is she going to go - resurrect her less-than-perfect marriage or take a step into the unknown? This story is made all the better by Moorcroft's breezy style of writing.

Diane thinks the policemen has it wrong when he tells her that her husband Gareth has been injured in an accident. Yet she soon discovers that flying in helicopters isn't the only secret he's been keeping. Diane struggles to come to terms with the lies which all revolve around the money they never had.
There are less skeletons in James' cupboard, in fact his family's problems are open enough for him to bear the brunt of them. But will Diane and James realise that at some point they need to stop protecting everyone else around them and work out how they can make themselves happy?
This is a real page-turner as every time you think you've sussed what the secret is, there's another twist to the plot. Fast paced and definitely keeps you on your toes. (AB)

Tess Riddell had a fiance, Olly,who dumped her via email. She falls apart, loses a baby and flees to Middledip, a little town where no one knows her. Tess has a habit of running away from life but finds the locals of Middledip welcoming and warm.
She meets one eligible bachelor by running into the back of his truck. A frosty friendship develops between them until Miles Rattenbury (Ratty) decides he'd like to develop a closer bond. Just when it all seems to be going well, Ratty discovers a secret that Tess can't handle and once again, she runs. Once she's seen the error of her ways, will Ratty take her back?
Neither of these main characters are particularly likeable and do not always act in an expected way. (LF) 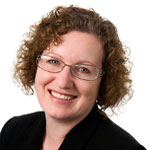