Lana Darling and her sisters grew up singing. After a devastating incident twelve years ago, she ran away and tried to make it big in the country music scene. It didn’t work and now she’s given up. She returns home to Darling Bay to reunite with her sisters Adele and Molly and fix up the old hotel that their uncle left them. As a struggling singer, she spent a disastrous one night with Taft Hill, who has made it as a successful musician. She agreed to sell him a song she wrote, Blame Me, and the royalties keep rolling in, so she has enough money to survive.
Taft Hill is struggling, too. He hasn’t had a hit since Blame Me. His manager comes up with the idea that he needs to collaborate with Lana to write another song. Taft heads to Darling Bay with this intention and harbouring memories of their night together. He doesn’t expect to fall hard for Lana and nor does she expect to ever see him again. But she holds a secret that no one knows about, not even her sisters. Can Taft break down her barriers and convince her to not only love him but let them write songs together as well?
This is an enjoyable stand-alone read even though the author has two previous books in the series about sisters, Molly and Adele. It’s a sweet romance where you’ll fall in love with the characters and their small beachside town. (LF)

Nora Glass is a household name thanks to her popular blog about being a single mum. Her daughter Elsie is now sixteen years old and Nora has worked hard to be the perfect mother. Nora takes clues from Martha Stewart and is always a competent and self-assured woman. Nora's precise blogs have detailed whether green products really clean and what should be packed for the perfect picnic. Lately, Nora has convinced herself that her memory loss, mood swings, and confusion are the telltale markers of perimenopause. As she sits down with her doctor to discuss her symptoms, the doctor's diagnosis is devastating. Nora cannot be the picture of composure anymore. She needs to rely on her twin sister Mariana more than ever. Nora and Mariana could not be more different from each other and have always had a complicated relationship. The two sisters will embark on a new relationship where roles are reversed and the bond of sisters is tested.
This is an incredible story about the bond between a mother and her daughter and the bond between sisters. The author does a beautiful job of dignifying a woman in her forties dealing with a devastating disease. (AO)

Three years ago, artist Kate had it all - a loving husband, Nolan, and child Robin, then it was all taken away from her when her son died of carbon monoxide poisoning and Nolan was sent to prison for killing their son. However, only Kate and Nolan know the real truth behind what happened and the events leading up to the incident. Two decades ago, Kate gave up a baby girl after falling pregnant to her then high-school boyfriend Nolan. Now years later, that girl Pree has found Kate and wants to re-connect with her mother as she is now pregnant and in the same boat and has always wondered if her birth parents have regrets. Has fate given both Kate and Nolan a second chance at getting to know their child?
This heart-wrenching novel has lots of raw emotion, which fans of family reunion stories will enjoy. (PP)

This is the third novel in the Cypress Hollow series. Naomi Fontaine has always dreamed of practising medicine in a small town. Her former patient, knitting guru Eliza Carpenter, convinced her to move to Cypress Hollow to follow her dream. However, no matter how hard Naomi tries, she can't seem to fit into the close-knit town. Her patients view her as a rather cold, yet competent doctor. When Rig Keller, a former doctor for oil rigs, takes over half of Naomi's practice, he is immediately welcomed with open arms into the community. Rig has witnessed his father and brother suffer excruciating pain after the loss of their spouses. He has no interest in ever loving someone that much. Naomi has closed her heart to love. Her work is her life and she has no intentions of getting involved with her new partner. As Rig and Naomi work together, their hearts begin to get the best of them.
The characters from previous novels make appearances throughout the book. And there is a bonus pattern for a beautiful knitting shawl at the end of the novel. (AO)

Lucy Harrison, a bookstore owner and volunteer firefighter, is happy with her small town life in Cypress Hollow. She spends her spare time with friends and family and enjoying her knitting hobby. When bad boy Owen Bancroft, Lucy's high school crush, returns to town, the sparks fly between them.
Filled with fun characters and great dialogue, this novel will win over even non-knitters. Knitters will love the knitting references throughout the book and the sweater pattern in the back of the novel. Fans of the author's first novel, How to Knit a Love Song, will be happy to see Cade and Abigail make appearances in this novel. (AO)

Abigail inherits a cottage from her beloved knitting mentor, Eliza Carpenter. Abigail, who is anxious to escape from her past, is thrilled to be moving to the country and turn the cozy cottage into a knitting store. But when she arrives at the cottage, she finds it is actually a rundown shack. And Eliza's nephew, rancher Cade, who owns all the land surrounding Abigail's new home, is furious that Abigail has inherited the cottage because he believes he is entitled to all of the land. With Abigail forced to stay with Cade until she fixes up the cottage, sparks fly but their circumstances force them to deny their attraction to one another. You don't have to be a knitter to enjoy this. (AO) 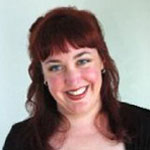