Eve's memory is so good, she can remember every single detail of her life since she was six years old. She now works in a dementia facility, helping the ageing residents hold on to their memories.
A man is found wandering down a motorway with a head injury. Named Adam by the police, he can't remember anything about his life so Eve tries to help him figure out who he is. Their story is intertwined with that of Rachel's, who hasn't reported her husband as missing because she blames herself for what happened.
It's a touching and profound read, which revolves around the clever juxtaposition of the two main characters - one who can't forget and the other who can't remember.

Annie isn't enjoying life – her mother has Alzheimer's, her admin job is boring, her husband has moved out and she barely speaks to her flatmate. While visiting her mother in hospital, Annie comes across Polly, a colourful character who has a terminal brain tumour. She's been given three months to live and wants Annie to do the Hundred Happy Days project where you do one thing every day that makes you happy.
With characters who are easy to warm to, this is a life-affirming story about loss, grief and friendship that will inspire people to find the good in every day.

For the first time in their friendship, pals Helen, Rosa, Ani and Marnie find themselves single at the same time. Whilst Helen is a perennial singleton, and Ani a seasoned dater, Rosa is newly divorced, but it is only when mercurial Marnie returns after a two-year hiatus from South America with the plan for the foursome to date each other's exes that the fun (or the horror) really starts.
Woods takes the traditional dating plot and gives it a refreshing and fun revamp in a novel about recycling exes. Like all of the best ideas, it's simple but effective, and it makes for a brilliant read, not least because of her superb characters.
She has the whole spectrum covered: the good, the bad and the geeky, with four strong, if not all appealing female leads (yes, I'm looking at you Marnie), a bevvy of interesting male counterparts, and strong cameos from Rosa's (wannabe) hip mum, her nightmarish boss, Suzanne, and Helen's cat, the recently knighted Sir Fluffypants. Though in a novel with a surfboarding, Scrabble-playing hunk and a lawyer nicknamed Legally Hot, it is the 'nerdy Viking' who steals the show. What is not to love? (JC)

Rachel Kenny has had a 'disastropiphany'. Aged thirty, she finds herself on the cusp of divorce and homeless but rather than dwelling of the negative, her friends reassure her that it's an opportunity to make changes in her life. So they put together a to-do list for her – not a bucket list per se, but an embracing life list, ten things that will prevent Rachel from sliding into a pre-divorce slump, including stand-up comedy, trying an extreme sport and, of course, sleeping with a stranger.
First things first though she needs to find a new home, but with a meagre budget, her options are looking limited. So when she hears about a room that's going rent-free - yes, really - she can't believe her luck and within days she's moved in with Patrick and his four-year-old son, Alex. In Patrick, Rachel finds a fellow soon-to-be divorcee struggling with facing up to a new life, so encourages him to create his own to-do list and soon the two of them are jumping out of planes, riding horses and jetting off to Disneyland all in the name of moving forward.
Woods has a real talent for writing humour and completely nails the comedy elements of the novel. The romance and emotional connection were there but didn't have the same strength for me, in large part because such moments aren't really delved into. Four-year-old Alex, for instance, offers a perfect emotional foil but his role and relationship with Rachel is narrowed to snippets.
The truth about Rachel's marital breakdown offers a refreshing twist, but isn't given enough explanation and leaves her somewhat questionable. Nor did I find Patrick's wife Michelle's absence particularly convincing. These aside though, I loved the concept of the story and the lists - even if sleeping with a stranger is somewhat skirted over - and found the whole thing fun and engaging. I can imagine readers will find much to relate to in the idea of an embracing-life list and Woods really captures the whole scenario wonderfully well. Not only that but Woods may very well have created my new favourite word, disastropiphany - OED are you listening? (JC) 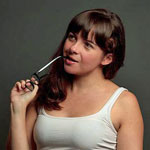 The Lives We Touch