The last thing Kelly Madigan expects from her somewhat kooky mother following her unexpected death is a letter outlining her wishes for Kelly. These encourage her to make a change in her life – something unpredictable and adventurous – and some not-so-subtle hints about ditching her reliable yet safe boyfriend of six years, Sam. So when an opportunity comes up to move to London to work on a cookbook with infamous actress Natasha Spencer, Kelly throws caution to the wind. But Natasha turns out to be an even bigger diva than anticipated and then there’s the matter of her very dashing husband, Hugh. Dana Bate sticks with the foodie niche that she has made her own and there is admittedly a lot of food talk in this one, sometimes overwhelmingly so. However, there’s also a strong plot which keeps the novel moving and a refreshing love story and angle to the romance. Indeed, the novel gives us a different sort of relationship and perspective that is both intriguing and complicated. It’s great to see a much knottier and problematic love scenario and one that throws up all kinds of questions and issues. The fact the ending remains unresolved and somewhat spiky was compelling and authentic to the story, yet nonetheless it’s crying out for a sequel and I’d be delighted to spend more time with these characters and see how things pan out – fingers crossed! (JC)

aka A Second Bite at the Apple

Sydney Strauss had always loved cooking and dreamed of becoming a food journalist, but bad memories of her ex-boyfriend Zach somewhat took the shine off that world. When Sydney finds herself out of a job however, the chance to work at a farmers' market soon leads towards Sydney's dream of being a journalist. She just needs a big scoop to make a name for herself. And boy does she find one, the only trouble is it involves breaking her new beau, Jeremy's, confidence, and a little bit of sneaking around. But he'll understand, surely? I immediately found myself drawn into this novel, it's charming, entertaining fare and perfect if you're after good-quality chick lit. Although the action and drama really kicks off in the second half of the novel, for me the book lost some of its appeal here, as you watch Sydney dig herself deeper and deeper into a hole, she becomes a less appealing and more frustrating character. A somewhat tangential incident with the downstairs neighbour and the FBI also brought in a much more sinister note which felt really out of place. I'm not usually keen on these foodie-style chick lit novels but Dana Bate doesn't go OTT on the gastronomy and it feels much more integral. Overall, this is well-written, engaging read even if you may find yourself wanting to give the heroine a good shake. (JC)

After Hannah Sugarman's unsuccessful meeting with her boyfriend's parents and embarrassing him at a party, he calls time on their relationship. She is left in a job she hates, with two professors as parents who are constantly trying to push her towards a future she doesn't want. Having moved out of the flat she shared with her boyfriend Hannah now finds herself living in a miniscule basement. The only thing that keeps her sane is her cooking, so when her best friend Rachel suggests she start a secret supper club in her new apartment, she agrees, after all what's the worst that can happen? But when her apartment floods she ends up running the supper club in her landlord's apartment whilst he is away on business, and if the trespassing and deception is not bad enough, her landlord just happens to be a rather upstanding citizen who is currently running for local office. As well as trying to keep the secret from her landlord, Hannah also has to keep up her day job which is becoming increasingly difficult, negotiate her love life and deflect her parents' continuous questions about fellowships and careers. The Secret Supper Club introduces a wonderfully witty new voice to chick lit, who has a great capacity for humour (with one uncharacteristic insensitive slip aside) and suspense. The actual supper clubs and the guests do not receive the main attention of the story but this is in no way a criticism, indeed, the plot works really well and the novel is a fun and energetic read. Be warned however that reading this may get your tummy rumbling; but the recipes at the back of the book offer a great solution. (JC) 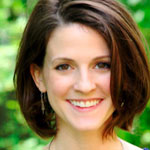