Sofia Khan knows all about aborted relationships, failed love and near-marriage misses. Only a month ago did she break up with partner Imran after he suggested once they got married she would move in with him … and his parents! Now she’s got to face the relentless questioning from her own family about when she will be getting married, after all she is THIRTY! But Sofia is in no rush, in fact she’s coming round to the idea of being alone when she’s asked to write a book about Muslim dating. And in the name of research she has to throw herself into the dating scene, Muslim style.
Ayisha Malik’s debut is funny, current and a really exciting addition to the face of women’s fiction. She’s not afraid to take on cultural stereotypes and cliches, often to genuinely humorous effect, but she also flags up issues of race, prejudice and misconception in a very real and honest way. Malik’s characters are relatable and larger than life and in Sofia she has a universal heroine. The various love interests made for a compelling story, although it would have been nice to have seen more of Naim and further complications to the different relationships. It did take me a while to get into the writing and I felt the pace sometimes varied, but the diary, blog, email and text style again gave the novel vibrancy and a modern appeal. The real strength of the story is in the way Malik shares Sofia’s plight with humour and irony and it would be great to catch up with Sofia and the gang for another instalment. (JC) 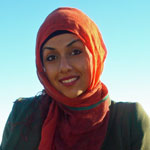 The Other Half of Happiness